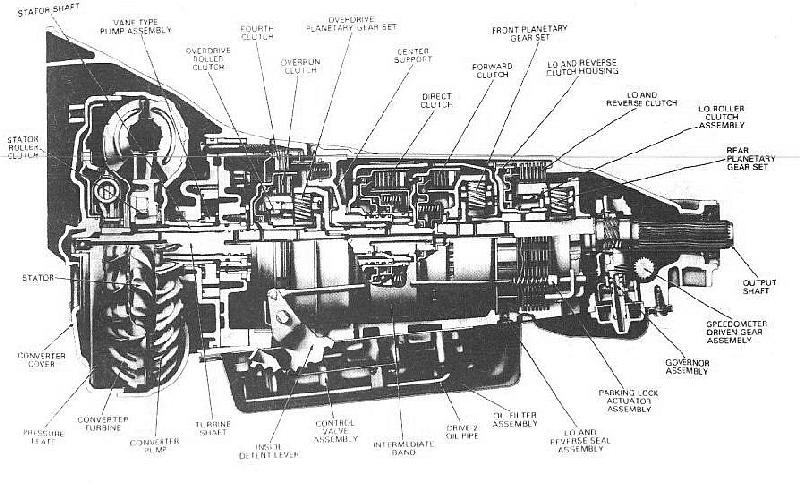 
First off, don't let the cut-away view of the TH200-4R transmission above intimidate you. Everything associated with this repair can be done in your driveway and does not involve removing the transmission from the car. It took me about 4 hours to perform, at a leisurely pace, with intermissions for lunch and parts runs. I won't fool you though, this task is more involved than your typical oil change (and certainly involves a lot more mess).

A side benefit of doing this repair (at least for me) was the knocking down of the self imposed intimidation of working on a transmission. I've never dropped a transmission oil pan in my life, but now I feel I can do it with ease.. and will perform all future transmission filter / ATF maintenance myself. I took some steps to ensure that next time, the job will be a lot easier, and a heck of a lot less messy. The tools involved in the repair are typical shadetree mechanic type; the most exotic of which was a torque wrench.


After 30 minutes of Overdrive (OD) driving at highway speeds, the transmission appears to downshift late, causing near engine stall with very low RPM when coming to a stop; then with acceleration from a stop, the transmission appears to upshift early, again causing very low RPM at the shifts and loss of torque. What is really happening here is the torque converter's lock up feature locks up earlier than it is supposed to on acceleration and unlocks too late on deceleration. I have heard from people who have experienced an extreme version of this problem where the engine actually stalls out.

I have found that you can delay the appearance of "The Problem" by using the Drive (D) gear position to drive around town. This assumes that the majority of your around the town travel time is spent at 45 or less MPH. This doesn't help for highway driving at speeds above 45 MPH where engine RPM in the Drive gear would be excessive.

To test the lockup feature of the torque converter on your car, put the transmission in Overdrive (OD), accelerate to 45-50 MPH and maintain a constant speed. While maintaining the constant 45-50 MPH, tap the brake pedal briefly with your left foot, not enough to apply the brakes, only enough to light the stop lights momentarily. You should feel a slight "downshift" and engine RPM should increase slightly, then an upshift along with a lower engine RPM. This is the Torque Converter going out of and back into lock-up mode. Note, this test can only be performed once the engine/transmission have reached operating temperature as this feature is controlled by the car's computer, which only allows lock-up at temperature. "The Problem" only appears after an extended period of OD driving.. so you should be able to feel the correct operation of the torque converter lock-up feature within a few minutes of starting the car. Once the problem present, there is no "downshift" or "upshift" felt, the torque converter remains in lockup mode while performing this test at 45-50 MPH. Compare the good and bad lock-up conditions.. you'll see what I mean.

I started to do some research on my own.. and soon zeroed in on the Torque Converter Clutch (TCC) system. The first transmission shop indicated that they had replaced the TCC Solenoid. So, when it came time to rebuild the transmission again (grinding noises and leaking ATF) I looked at other options to solve the problem. I had the second shop replace the torque converter with a B&M Holeshot 2000 converter that I supplied to them. I also instructed them to replace the TCC Solenoid and have them install a B&M Shift Kit (Stage II) to replace the shift kit that had been installed at the first shop years before. To my dismay, the problem continued. A tip from a Monte Carlo Email List member pointed me in the direction of the "pressure switch" in side the transmission. This ended up being the 4th Gear Pressure Switch that the CZ model (for the Monte Carlo SS) of the TH200-4R uses to tell the ECM when the transmission reaches 4th gear. That lead ended up (logically) to be the wrong path.

The ECM controls the TCC lock-up feature by grounding negative side of the TCC solenoid, enabling lock-up. Power to the TCC Solenoid is provided through a switch on the brake pedal that interrupts power when the brakes are applied. This is what causes the lock-up to disengage in the test above. When the brakes are applied, the TCC should not be locked up, because power to the solenoid is removed. For this reason, I concluded that the problem was not electrical in nature, and therefore was not caused by the 4th Gear Pressure Switch (signal to the ECM).

The more I thought about it, the more I convinced myself that, despite what the two transmission shops had told me, the TCC Solenoid had not yet been replaced, and was in fact the cause of "The Problem". I ordered the parts, and performed the repair outlined below on Sunday, March 14th. The problem disappeared and has not returned! Yippie! After 8+ years, it's really nice to drive around town with a normal transmission again.


The Solenoid, Filter Kit and Pressure Switch part numbers listed below are specifically for the 1986 Monte Carlo SS, with TH200-4R model "CZ" transmission. If you don't have an SS, or a Monte Carlo, or an 86 model; check with your GM dealer parts counter for exact part numbers.


(Hint: Check out the tip in the Avoid the Mess section below.)

First off, resign yourself to the fact that you WILL get dirty. You WILL get ATF in your hair. You WILL be smelling ATF for a day or so after the job. All of these are temporary, and part of the joy of doing work on your car yourself. The satisfaction and pride of doing it yourself (not to mention the labor cost savings) will vastly out weigh any amount of dirt and grime. Above all, have fun while you are taking on this task. The instructions below may seem excessive at first glance. They are straight forward, with a lot of detail for those not accustomed to doing a lot of work on their cars. Once you get in there, everything is almost self explainitory just by looking at the transmission with the oil pan removed.

A short word of warning. Automatic Transmission Fluid is somewhat flammable. Be smart, don't smoke while you are anywhere near a large amount of ATF, or throw semi-lit cigarette into a trash can full of ATF soaked shop towels. No, I'm not saying this out of experience. Just fore-warning.

The instructions below are specific to the Monte Carlo SS with a TH200-4R "CZ" model transmission. If you don't have an SS, the internal wire harness instructions may differ slightly. Consult a shop manual first.

Avoiding the Mess, an alternative method.


The following tip for avoiding the ATF mess when dropping the tranny pan was received from Scott Wheaton:

JC Whitney carries a 12 volt oil pump that allows you to remove 95% of the ATF from the tranny pan through the tranny dip-stick tube. The part number is 15JE5180Y and costs $18.99. The pump is normally used for removing oil from boat engines but works equally well for this application. Just put the supplied plastic hose down the tranny dip-stick tube, connect the pump's alligator clipped power cable to the battery and suck up the ATF into a suitable container through the outlet hose (approximately 5 minutes). Once drained, remove the tranny pan as described earlier, although this time without the ATF shower.

This avoids the big drain mess, and eliminates the need for a drain plug (another possible place for leaks to occur). This also works great for the once yearly ATF changes (you do this right?) without mess.

Thanks for the tip Scott.


"The Alternate Solution": Let someone else do it!


I think I am qualified (from experience) to say that even if you tell a transmission shop to replace the TCC Solenoid in your SS, you're still at their mercy in trusting that they do the job right (or at all). As stated earlier, I twice was told by two different transmission shops that they had replaced the TCC solenoid during a transmission maintenance (the first time) and complete rebuild (the second time). If either of these "qualified personnel" had done what they had said, I wouldn't have had to put up with this problem for more than a few days back in 1991.

Here are a few tips that I've learned in regard to any out-sourced automotive work.


Here are some links to great web pages that will tell you everything you ever wanted to know about how a Torque Converter Clutch (TCC) works. I used these pages when I started research on the problem I was experiencing.